Back in January 2019 I posted a series of blogs about my Wolfe heritage. Those stories were mostly written by my deceased brother Evangelist Larry E. Wolfe with a few of my edits and additions. If interested in reading them the first chapter can be found here: https://lobochronicles.com/2019/01/30/wolfe-pack-story-chp-1/

Larry also wrote about our Mother’s side of the family, the Anspachs from Lebanon County Pennsylvania. At first I thought of just posting his writings but then ended up doing quite a bit of research of my own and I also conducted interviews with my Uncle Wayne (Snack) Anspach. So now I bring to you the first chapter of the “Anspachs – The Tale of Two Houses”. I’m very grateful for my Uncle Snack who had a phenomenal memory and who contributed to this story.

There’s just something about a house that makes it a home. Our earliest memories hearken back to remembrances and adventures at “home”. We discovered, we learned, and we experienced a range of emotions, we loved and were loved. A home is a place of refuge, no matter how elegant. It’s a place of cover from the elements whether they be from nature or human nature. We may leave, and even go astray far afield from our roots, but at some point we remember home and yearn to return to the safety of that place. Homes may be palaces or meager shantys like the one pictured above, but nevertheless they are still home. Though they must be wisely built to last….

Jesus said, “Therefore whoever hears these sayings of Mine, and does them, I will liken him to a wise man who built his house on the rock: and the rain descended, the floods came, and the winds blew and beat on that house; and it did not fall, for it was founded on the rock. Matthew 7:24-25

The house pictured above was originally built in a hidden valley between two Blue Mountains at a place called Rausch Gap. The coal mining industry had sprung up on the side of the mountain after the Civil War in the late 19th century along with a Gold Mine or two that quickly petered out after a short 10 year spurt of growth leaving a village with no reason for being. The homes, the hotel, the stores, the ancient healing waters of Cold Springs were all forgotten.

Families whose husbands fought in the Civil War came to the valley to make a living but in a few short years their sources of income withered away. Wild game could be harvested, a garden could be planted but eventually the grass was actually greener and alluring just back over the mountains to the south into northern Lebanon County. 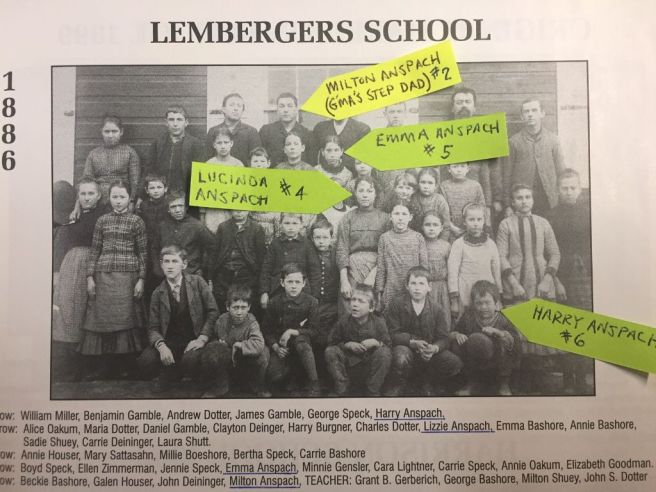 Editor’s Note: Lembergers School burnt down and was re-built and re-named as Harrison School 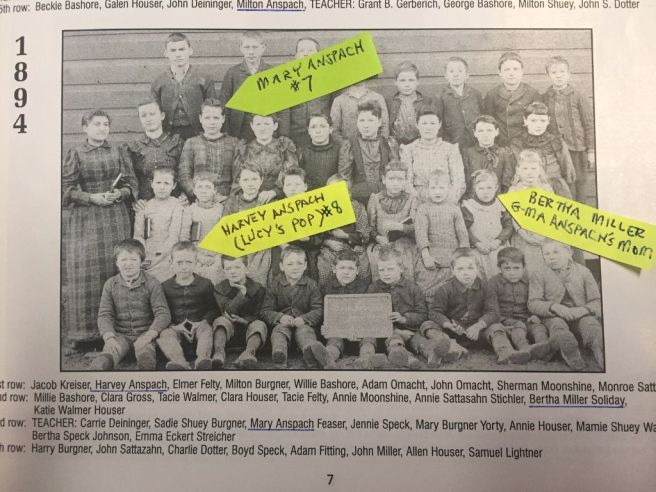 The youngest Anspach child Harvey at 8 yrs old and sister Mary are shown above. ALSO, Bertha Miller is on this picture. She would grow up and marry and have a child named Margaret from Miles Soliday who died at age 24 from a burst appendix. The young widow moved home to her Mother and Father David & Rebecca Miller and then Bertha later married Harvey Anspach’s oldest brother Milton!

Below is a picture of Milton & Bertha with some of their children.

Henry Anspach, my earliest ancestor on my mother Irene’s side made his living in either the Coal Mines or the Sawmill industry but in 1890 when work was no longer available he (at 51 yrs of age), along with his wife Susannah (age 42), had their house in Rausch Gap dis-assembled, loaded onto a wagon and with most of his children in tow, hauled their home and their belongings over two mountains to where they had purchased a 3 acre plot of land along Bullfrog Road in East Hanover Township.

The Anspachs would set up housekeeping once again and raise their family along a dusty two lane road on a very meager income. Their home had no electricity and was heated by wood gathered in the nearby forest or with coal when they could afford it. They planted a garden along the west side of their property and the woods to their south held plenty of squirrels, pheasants and deer. They pumped their water up from a hand dug well behind the house with a mechanical hand pump that sat on a platform of wood above the well. That hand pump worked well into my young adulthood years in the early 1970’s.

It’s likely that Henry used his skills with his hands in carpentry or physical labor of some sort to provide for the family. Though he would only live another 11 years and die in 1901 at the young age of 61 just into the dawn of the 20th century leaving his wife Susannah a relatively young 52-year-old widow. 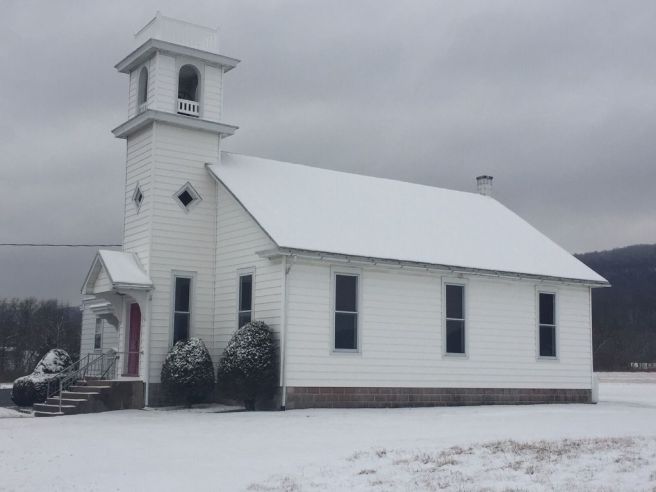 Susannah was a “pistol-packing” mother and grandmother, as she bought this .22 revolver, and would take up the leadership for her family after Henry’s passing. The only child remaining at home at that time was their youngest child, her son Harvey, who was only 15 when his father died. The other 7 children, the oldest being Savilla at 34, and second youngest Mary at 21, had left home and started their own families.

Young Harvey, my Great Grandfather, was married 3 years after his father Henry’s death on July 16, 1904 at age 18 to Jenny Stichler, the granddaughter of Charles Drews of “Blue Eyed Six” infamy. Jenny’s parents, John & Magdolena Stichler, lived just up the dirt road from the Anspachs on the corner of Rt. 443 and Bullfrog Road. John was called “Pappy” by his future grandchildren and he was known to be an evil man with a wondering eye. His granddaughters avoided his wayward stares as he often “checked them out” so to speak when they were visiting. It was no surprise that he was found dead along the road in June of 1940 having been hit by a car late one night when he was walking home from a “house of ill repute” in the city of Lebanon.

John & Magdolena Stichler’s children attended Harrison School as they had moved south from St Joseph Springs into East Hanover township after the trial and hanging of 5 of the 6 men who conspired to murder the town hobo Joseph Raber just 16 years earlier. The couple had a unique connection to the “Blue Eyed Six”.

John Stichler’s older brother Frank (they would name their firstborn son Frank pictured above) was the youngest member of the gang at age 19 and John’s wife Magdolena was the daughter of Charles Drews, the “Humble Butcher” who, along with Frank Stichler in 1878 were persuaded to drown Joseph Raber for only $300 in Indiantown Creek. The other 4 conspirators who paid them to commit the dastardly deed (Israel Brandt, Jesiah Hummel, George Zechman & Henry Wise) had taken out $8,000 worth of life insurance on the victim though they would never collect!

You can check out that story here: Blue Eyed Six & The Faith – Chp.1 (Israel Brandt)

Now back to the Anspachs!

Harvey & Jenny Anspach’s first child Clarence was born 3 months prior to the couple’s marriage on April 13, 1904 and so it’s apparent they lived at home with Harvey’s widowed mother Susannah for an extended period of time. When Susannah passed away 17 years later in 1921 (at age 73) rather than leave the home to her eldest son Milton she left the home to her youngest child, her son Harvey & wife Jenny. In my generation they went by the nicknames “Lucy’s Mom & Pop”. It was said that Jenny didn’t like the name Grandma so she insisted on being called the Mom of her youngest child Lucy! So until their dying day we called them “Lucy’s Mom & Lucy’s Pop! We honored our elders!

Though Susannah & Henry Anspach had a relationship with the Church of God just up the street from their home, their son Harvey & wife Jenny would not follow in their footsteps and were not “church people” as people sometimes characterize their “non-faith”. Maybe it was because Jenny carried the stigma that her Grandfather and Uncle were hung for murder. Maybe she built an imaginary wall between herself and her Creator. Certainly Jenny’s parents Pappy and Magdelena Stichler didn’t pass down a tradition of faith and Jenny was often heard to say that a strong person doesn’t need religion!

We do know that “Lucy’s Mom” would not allow anyone to speak of the “Blue Eyed Six” in her presence, and it was only after her death in 1970 that her husband Harvey took his grandson “Snack” on a tour of all six graves of the Blue Eyed Six. Snack would go on to write a book on the Blue Eyed Six and gave tours of their gravesites to interested individuals and groups until his death at age 89 years of age in May of 2019.

Like their parents, Harvey & Jenny’s children would have little to no interest in the Christian faith. In fact, Clarence their firstborn (known to us as Pop) would not permit his wife Margaret to attend church nor to even own a Bible! Both of Pop’s brothers John & Wayne would become alcoholics like their big brother.

Pop would become a raging alcoholic and live life like a “bull in a china shop” as they say. He would come home drunk night after night and demand that Maggie (as he called her) get up at whatever time of night and make him some eggs! He stole chickens, broke his marriage vows, fought in barrooms and flattened his son John’s nose like a pancake at a tiny infraction of dis-respect! Then he refused to get him the medical attention he needed.

Most of Lucy’s Mom & Pop’s other children’s families were dysfunctional as well, as some lived in slum-like housing going from paycheck to paycheck if in fact they were even working. I recall NO family reunions of happy relatives enjoying life together. It seemed to all be pain and despair!

But that life would not be good enough for one little lady, my Grandmother Margaret Soliday Anspach! She knew of the teaching of the Apostle Paul in the New Testament:

Do not be deceived, God is not mocked; for whatever a man sows, that he will also reap. For he who sows to his flesh will of the flesh reap corruption, but he who sows to the Spirit will of the Spirit reap everlasting life. And let us not grow weary while doing good, for in due season we shall reap if we do not lose heart. Therefore, as we have opportunity, let us do good to all, especially to those who are of the household of faith. Galatians 6:7-10

Margaret was determined to follow that principle and change the path of her family’s trajectory from down to UP! 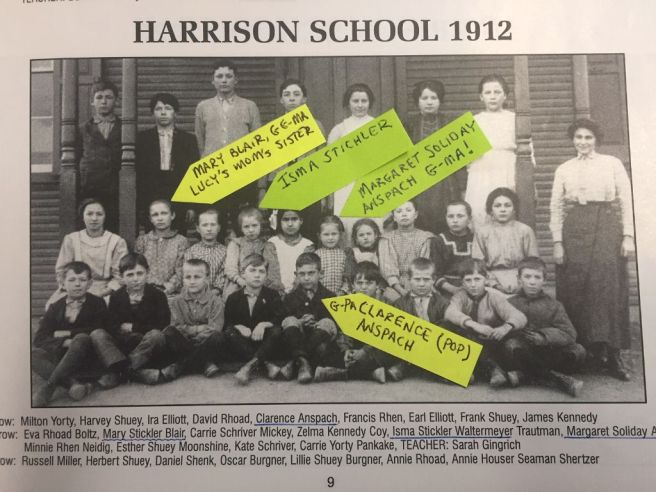 In the front center is my Grandpa Clarence Anspach with his future Wife Margaret Soliday sitting behind him. Also in the picture are Clarence’s Aunts Mary & Isma Stichler who were younger sisters of his mother Jenny Stichler Anspach!

The next Chapter in “The Tale of Two Houses” will tell the story of the Soliday & Miller houses, how they relate to the Anspach house, and how one little lady named Margaret changed the course of family history! 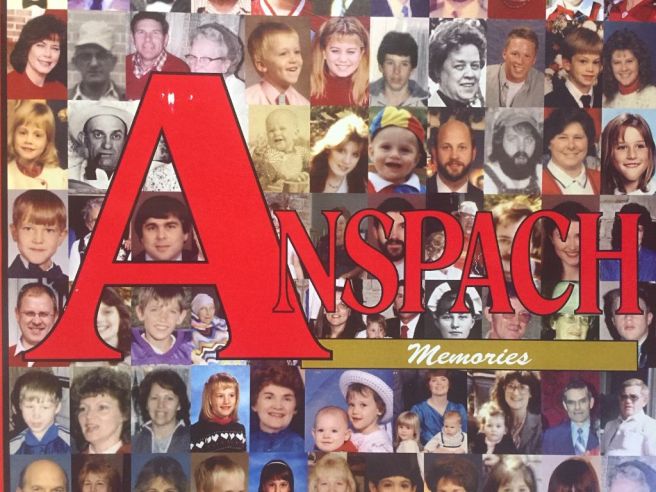