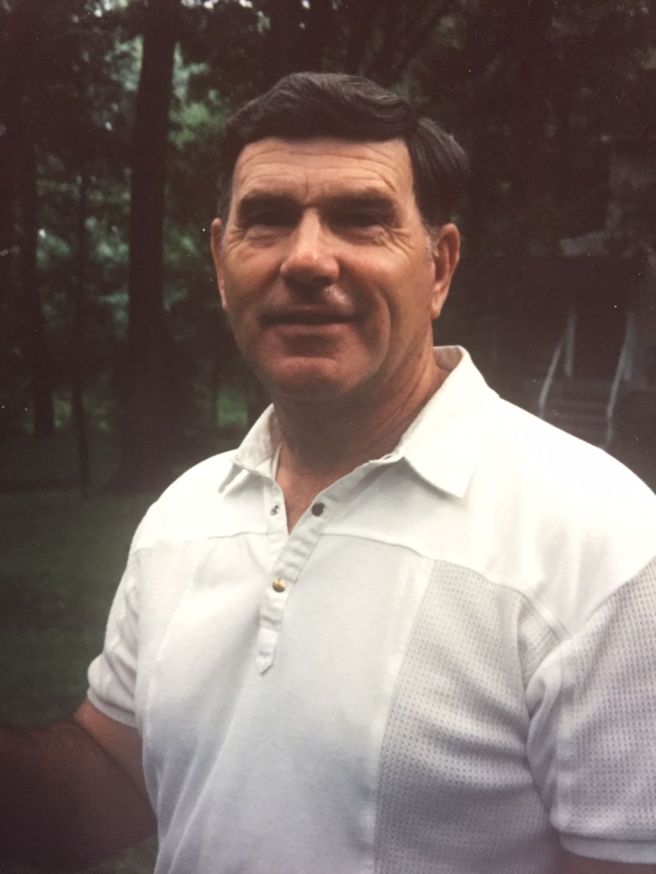 Born in poverty in 1930, the 4th child to Clarence and Margaret Anspach, my Uncle Wayne (Snack) Anspach learned very early, that life served him very well when he was a friend to all, and that included his father and mother. He was a loving and supportive child to his mother and a very compliant child to an abusive alcoholic father (who nicknamed him “Dumb Davey”) and he worshipped his big brother John who seemed to succeed in everything when Snack had to work so hard to keep up.

Snack would jump and ask “how high” on the way up, when his father “Pop” threw a command his way. To disobey, was very dangerous to your health and well being! He was also a life saver to his mother “Maggy”, as Pop called her, when she was pregnant with his little sister. Snack became the chief cook and bottle washer as Maggy, late in her pregnancy, could not keep up with her household duties.

Snack even introduced a new dish to Pop which was a very risky move! They were out of potatoes, which Pop demanded to be fried or mashed for him on a daily basis. No matter that he didn’t provide sufficient money for groceries. So Snack cooked up some squash instead and prepared them just like mashed potatoes. Pop knew something was wrong right away, but then he ventured on and took one bite, and another, then a smile came to his face and he said, “Not bad, not bad at all!”

One day, late in his teens, Snack was standing outside with Pop, and a plane flew over. They lived next to a Military Reservation and this was a common occurrence. Snack said to Pop, “If you let me join the Army I’ll be able to learn to fly one of those!” Snack really wanted to stretch his wings in other ways, and get out from under Pop’s iron grip, knowing all the while he would likely never fly a plane. And even though his older siblings had left the nest, and Pop was using him for force labor, he miraculously gave Snack permission to join the Army.

That was his big break, and would lead to a career and open up wide avenues of exploration, education and experience that Snack could in no other way obtain. When he came home from basic training he was helping Pop on one of his projects in his shop, and explained to Pop how “Ohms Law” worked. Pop turned to him with an astonished look on his face and exclaimed, “Why you’re no Dumb Davey anymore, I think you’re the smartest kid I have!” What a great day!

My earliest childhood memory of my Uncle Snack is at Thanksgiving dinner. After many years of treating Thanksgiving as any other day, one year Grandma put her foot down, so to speak, and declared that she had saved up enough money to buy a turkey, and by God’s grace they were going to celebrate Thanksgiving! Pop, not being the religious type in the least, didn’t protest one bit, afterall he loved to eat!

When everyone was seated, and it was time to partake of all the delicious Pennsylvania Dutch food, Grandma, still wearing her trademark apron, made everyone pause and then called on Snack to give the “Blessing”. She of course didn’t call on Pop, nor big brother John. It was her kind, caring and compassionate son Snack, who she called on, since she knew he had a connection with the Almighty.

I wasn’t there for that first Thanksgiving but in later years I experienced the spiritual effect of Uncle Snack’s prayers as he seemed to be taking directly to God as he thanked the Lord for everyone gathered and for all of our blessings. He became to me “My Praying Uncle” and I knew like Grandma did, that he had a special relationship with our Heavenly Father.

So when Snack’s wife Aunt Marion passed away in 2007, I decided to visit my Uncle Snack the first Saturday night of each month, hoping to get to know him more than just on a surface level, and also to learn more about my family heritage. He welcomed me warmly and as time passed we both looked forward to those times together as we’d watch the Phillies (usually lose:), talk about current events, how my family was doing, more about our family history, and of course watch the Lawrence Welk Show!

A phrase I heard him say time and time again was, “I might have told you this story before but….” and then I’d just let him go ahead and tell it again, and again, and sometimes even again. He had an amazing memory! He just couldn’t remember if he was repeating a story he had told you before!

But the story he shared with me that helped me see and understand the secret of this kind, and loving, and compassionate man’s life, was this one. You see, in 1946 when he was just 16 years old, his family attended revival services at their church, Emmanuel United Methodist Church. Their pastor Arthur Miller preached the fiery Gospel, that Christ died on the Cross for Sinners, was buried and rose again the third day, and that anyone who repented of their sins and trusted Christ as their Savior would be born from above, and be given eternal life.

At the end of the message and as they stood to sing the closing song, his big sister Minnie encouraged him to respond to the invitation. Snack’s heart was already throbbing as he gripped the pew in front of him, and he felt as though an unseen force, like a magnet, was pulling him from his pew to go down front to the altar. He obeyed the Spirit’s voice and walked the aisle and knelt at the prayer rail, and accepted Jesus as his Lord and Savior, and he became a new creature in Christ. From that day on he wasn’t perfect, but he had Christ and his Bible as his guide, and he endeavored to live a God honoring Christian life.

He demonstrated God’s love by the way he lived his life as he cared for his family, his mother, his extended family, as he served in his church, taught Sunday School, led civic organizations, ministered to residents in retirement homes, on and on it went.

He would often tell me, “I gave a witness today” as he would retell how he had passed on a Word from the Lord to someone in need that came across his path. I’ll close with a Bible passage he shared with me one night when we were talking about Scripture memory. He had memorized these verses from Hebrews chapter one.

God, who at various times and in various ways spoke in time past to our fathers by the prophets, has in these last days spoken to us by His Son, whom He has appointed heir of all things, through whom also He made the worlds; who being the brightness of His glory and the express image of His person, and upholding all things by the word of His power, when He had by Himself purged our sins, sat down at the right hand of the Majesty on high. Hebrews 1:1-3

After publishing this story of my Uncle Snack Anspach I attended and participated in his “Celebration of Life” memorial service. His daughter Cindy shared that she followed his strict instructions for the service which he left for her in a container under his office desk. Every part of the service, the Sharing Time for family and friends, the hymns that were sung: “The Church’s One Foundation”, “Wonderful Grace of Jesus”, “It Is Well With My Soul” & “The Doxology”, the Scriptures read: Matthew 6:19-36 (where it says “Seek Ye first the Kingdom of God”), the Benediction given by his long time pastor and lastly, to have a soloist sing the Lord’s Prayer, was all laid out beforehand.

It was clear to me that Snack meant to accomplish two things, One: Give Worship and Praise to his Savior Jesus Christ, Two: Appeal to the family and friends in attendance to trust in his Savior like he had that day back in 1946.

Even the quote from Billy Graham on the back of his Memorial Folder which said “The greatest legacy one can pass on to one’s children and grandchildren is not money or other material things accumulated in one’s life, but rather a legacy of character and faith” pointed to his desire for others to follow in the Faith as he did.

So if you don’t know the Lord Jesus in a personal way will you consider receiving Christ today? That step will guarantee that one day you will be reunited with your loved one and friend which I’m sure you miss so much.

This message makes it very clear your need and the steps to take: Guaranteed Reservation in Heaven!

Enjoy the below recordings of some of Snack’s stories:

I treasure these stories! I hope you enjoy them as well.