A wonderful lady has gone to be with the Lord. Her name was Laura M. Anspach born December 23, 1926 and she turned 90 years old this past December. She was my aunt on my mother’s side and was my second mom. I’ll tell you about that in a minute but here’s a little bit about her life.

When she was 18 she married John Anspach, a hard working PA dutchman whose abusive father insisted he keep his many jalopies on the road. John became a very good mechanic and once married, started a business out of his one stall basement garage. He later managed to buy the land across the street from his house and founded Anspach Auto Parts in a time before computers and the internet. He tapped into what was called “The Wire” which was an intercom phone system that was “live” and hooked into all the major “junk yards” on the northern east coast area by which they would communicate and coordinate the sale of autoparts up and down the east coast. My mother actually drove a flatbed truck for her brother John to deliver car parts to central locations where the parts were transferred to other businesses on the way to the end customer.

Laura ran the business behind the scenes like she did many other enterprises behind her man. John was always working deals and had his fingers in multiple businesses and enterprises all at the same time. Laura made sure the I’s were dotted and the T’s were crossed. Whether John was running the business, President of Jonestown Bank, owner and operator of WAHT radio station, Lebanon County Commissioner, etc. Laura fulfilled the saying “Behind every successful man there is a great woman”. They also had three awesome children Jeanne, Ed & Joe who are a wonderful testament to their loving mother and carry her legacy forward.

I am one of six brothers who were Aunt Laura’s nephews, born to her sister-in-law Irene Anspach Wolfe. Our mom ended up being a single mom back in the sixties and she was under tremendous strain raising six sons all by herself. So from time to time she was hospitalized with a nervous breakdown, as they called it back then. Four of us were too young to live on our own, so the loving arms of relatives would take us in while mom was in the hospital, sometimes for months at a time! It was at this time that I would go to live with Aunt Laura and Uncle John.

I was afraid of Uncle John (in a good way) but not Aunt Laura. She was SO kind and loving and was like a second mom to me. She cared for me, bought me clothes and took me to the dentist which was really needed. But I’ll never forget the first morning I woke up at her house. I smelled pancakes! Now, I had pancakes before but I had never before tasted Mrs. Buttersworth syrup! So I sat down at Aunt Laura’s breakfast bar that first morning and gorged myself on pancakes smothered in butter plus that wonderful syrup. It’s still my favorite syrup today! Isn’t it amazing the things you remember?

Aunt Laura also had a spiritual effect on me as well. We would always pray before meals, and she would take me to Sunday School and church at a little Methodist church. I also distinctly remember the time she took me to a community “hymn sing” being held in the Northern Lebanon High School auditorium. It was there for the first time, while we were singing the great hymns of the faith, that I felt in my heart that Jesus loved me and was calling me to be His child. As a boy from a broken home that was very powerful, and I felt Jesus love and His warm embrace all around me. I knew it was going to be ok.

Laura had an impact on those around her. When dating John and after they were married he would bring her home to his Mom and Pop’s house. Now remember, Pop was VERY rough around the edges and violent at times. He once punched John in the face and flattened his nose because he thought John was talking back to him! Well, when Pop knew Laura was coming he actually cleaned up his act. Away went the booze bottles and the cuss words. He was actually afraid of Laura! In my opinion, what he was actually afraid of was the power of Christ living out of her life. We’ve all been around and known people that have affected us in that way. I know I do.

Aunt Laura had a huge impact on her community through her church and by volunteering in many civic organizations. Many young kids began to call her Aunt Laura as well. Here are some of the comments on my Facebook page when I informed them of Laura’s passing.

“So sorry to hear this. She was my boss many years ago when I worked at Anspach Autos. She was a very great person.”

“So sorry for your loss. Will keep your family in prayer. She was such an elegant and wonderful lady.”

“Oh, God Bless her soul. Wonderful woman. Many fond memories of her and the family.”

“I spent a lot of time with her she was a great lady. My kids called her aunt Laura forever and they still do, my prayers are with you and family”

I thank God for Laura Anspach, for her love for her Savior which spilled into love for me and I praise God for the wonderful impact she had on my life.

Sure of Heaven? Check this out: Guaranteed Reservation in Heaven!

Hi Folks! For those who have been praying for my brother Pooch (Warren) Wolfe and have been following my updates, it’s been a long while (last August) since I provided an update on his condition. To do a quick review, he came down with Melanoma Cancer last April. Tumors had spread all through his vital organs because of a cancerous growth on his scalp. Because of his 35 year career as a lineman for Met Ed working outside in the sun for all those years, he had been very faithful going to the dermatologist and had many such growths taken off but this particular one they said looked fine and left it go! Well, so much for that! While volunteering in a missionary facility last winter he got very sick and they thought he had contracted pneumonia but the source of the problem was actually the tumors in his lungs from the Melanoma.

Fast forward to July after he completed an aggressive and radical 3 month treatment called “Immunotherapy” at the Hershey Medical Center and his body was declared “cancer free”. He definitely got a miracle! See CAT Scan pictures below of before and after once the therapy had done it’s “healing” work! All of those black dots in the left picture are tumors!

With the tumors gone he and his wife Thelma thought they were in the clear but that wasn’t the rest of the story! Have you seen those drug commercials on TV where they promise amazing healing results and then at the end of the commercial they list in soft tones (and very quickly) all of the side effects that the healing drug may bring, even death? Well, that is exactly what Pooch experienced except the death part!

The tumors were gone but the drugs then began an incessant and aggressive attack on his digestive system. To put it plainly, the healing drugs almost killed him! With no appetite, nausea, colitis, constipation, weakness, on and on and back and forth it went all summer and fall. He dropped around 40 pounds of weight including most of his muscle mass. He even fell during that time and had to get 4 stitches to close a gash in his eye brow!

But because of his strong fighting will, his strong faith, and through the incredible care of his loving wife Thelma (who Pooch credits to keeping him alive) and through the thousands of prayers of his family, plus a family of believers around the globe he is alive today and praising his Savior for it! He has gained back 10 pounds of the lost weight and is getting back to being active. The picture at the top of this article (and below) is of him working on a new project helping his son Matt with his antique Dodge truck.

Finally, here is an update we just received from his wife Thelma. Keep the prayers coming! 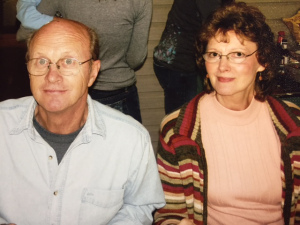 Family and Friends:  After several months of nasty symptoms from the cancer treatments, they finally subsided and the month of December was enjoyable.  His appetite returned and he is working on gaining back the 40 pounds he lost and the muscle mass, as well.  This week he had a clean reading of his PET Scan and the cancer doctor only wants to see him in three months for surveillance.  Many prayers were answered as we faced daily challenges and we thank everyone for your prayer support.  The LORD is good always.   – Thelma
More stories here: New Blog Index
January 3, 2017 ~ lobochronicles ~ Leave a comment

There is a story told about a missionary who led a tribal leader to the Lord. Some time later he went back to see the chief and asked how the new believer was doing. He said, “Inside of me there are two dogs. The black dog is mean and tries to talk me into making the wrong choices. The white dog is good and encourages me to make the right choices. The black dog fights the white dog all day.” When asked by the missionary which dog wins, the chief reflected for a moment and replied, “The one I feed the most!”

You know, most of us believers are the same way. There is a part of us that is Christ-filled, compassionate, trusting, caring, serving and focused on helping others. (Our White Dog or New Nature.) We also have a self-centered, fearful, habitual, controlling, anxious…