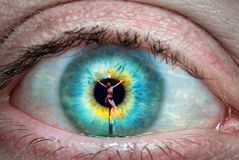 There is a tremendous truth in the life of every Christian that is a very well kept secret of the enemy, and that is… YOU were at the Cross! Yes, it sounds simple enough, YOU were at the Cross. Go to a quiet place and think about it, repeat it to yourself and let the truth of it sink in. “I was at the Cross”…. “I was at the Cross”, what a remarkable thought! Amidst the jeers of the crowd, the cowering disciples, the tears of John and Mary, the scorn of the religious leaders, the stares of the Roman Soldiers, the cries of the heavens scowling down on three agonizing souls…. in the darkness… YOU were there.

How could this be you say? How could you, living in the dawn of a new century, have been at the site of the most momentous event in history almost 2,000 years ago, on a hill called Calvary on which Jesus died? The fact is in the mind of God, you were not only AT the cross, you were ON the cross! Yes it is true, but only if you have the life of His Son Jesus flowing through your being. Consider the words of the Apostle Paul in Galatians 2:20 where he said, “I have been crucified with Christ, and I no longer live but Christ lives in me….”. The Apostle Paul was not among those who stood on Calvary, nor was he physically on the Cross in the Biblical record, neither did he die by crucifixion since tradition records that he was beheaded for his faith.

So how could this beloved Apostle and writer of most of the New Testament say, “he was crucified with Christ”? It is because he understood through the inspiration of the Holy Spirit the important Biblical truths concerning the physical man and the spiritual man. Let me illustrate by drawing a contrast between your physical and spiritual heritages. You owe to your physical ancestors all that you are physically. Your looks, the color of your skin, your language, and ultimately your position in society, your wealth, education, etc. all were passed to you from your physical ancestors. Just as a whole range of lush green mountain forests can thank the persistence of one lone acorn springing forth with life from the mountain soil, so you can thank the persistence and resourcefulness of your ancestor’s DNA from generation to generation for all that you are physically today. This goes all the way back to the Garden of Eden as we are all physically in Adam.

The Bible says in 1 Corinthians 15:22 “For as in Adam all die, so in Christ all will be made alive.” One is physical the other spiritual. We are physical beings “in Adam” and we walk this earth knowing that our days are numbered and we experience the suffering and affliction all the children of Adam have down through the ages. Which brings us to the second half of this principle. In Christ all can be made alive. All who know Him or ever will know Him, can experience all of the spiritual blessings which He won in His victory on the Cross because in a spiritual way, while He hung there, we were IN HIM on the Cross. Read that again… slowly.

We need to understand and comprehend that Christ did two crucial things for us on that Cross. By dying in our place He covered our sins and fulfilled God’s requirement making it possible for His spiritual life (His spiritual DNA as it were) to indwell our spirit and ultimately our physical body. This happens when we place our faith in Him at conversion, when we are “Born Again” (see John chapter 3). Secondly,  He made it possible for us to defeat our old nature or “old man”(the flesh within us) in our daily walk on earth because positionally, that is from God’s perspective, our old man was crucified on the Cross!

If this were not true then the Apostle Paul would not have declared over and over in his epistiles to the Church, and in essence to you and me, the FACT of this wonderful truth. Consider these passages:

Romans 6:6 “For we know that our old self was crucified with Him…”

Romans 6:8 “Now if we died with Christ we believe that we also will live with Him.”

Romans 7:4 “So my brothers, you also died to the law through the body of Christ.”

Colossians 3:4 “For you died, and your life is now hidden with Christ in God.”

Galatians 2:20 “ I have been crucified with Christ; it is no longer I who live, but Christ lives in me; and the life which I now live in the flesh I live by faith in the Son of God, who loved me and gave Himself for me.”

The Apostle Paul knew this was true because he experienced spiritual victories and blessings while in his physical body as a result of this important truth. He was not unlike you or me when it came to striving with his old nature that often led him to sin and set him up to be defeated by temptation, trials and suffering. What made the difference was, he discovered that the powerful life of Christ flowed into him from Calvary and his old man was crucified there! He realized he was on the Cross and therefore by faith defeated his spiritual enemies which could have robbed him of all the joys of the Christian life.

So stick with me as I close…. go get a drink of water, take a deep breath.

Consider the rest of Romans 6:6, a portion of which I quoted earlier, “For we know that our old self was crucified with him… that the body of sin might be rendered powerless, that we should no longer be slaves to sin.” Here is the unpreached truth of the ages, WE NO LONGER HAVE TO BE SLAVES TO OUR SINFUL NATURE, THE TEMPTATIONS OF THE WORLD, NOR TO SATAN’S SCHEMES BECAUSE WE ARE DEAD IN CHRIST TO THEM, SINCE WE WERE ON THE CROSS WITH HIM! Rejoice, for the victory over your spiritual enemies is yours to claim by faith! Can you see it? The power of Christ on that Cross flows down through the annals of time right to your heart! Victory awaits!

So how is it done? Do it the Apostle Paul’s way. He knew the victory had been won so he knew he had to get God’s perspective on the battles he would face. He needed God’s thoughts pouring through his mind. I’m sure he used the Old Testament Scriptures and the available New Testament writings as well, and so he memorized and meditated on these truths breathing them in and out of his new inner man created in Christ. When facing sin he would pull out his Sword of the Spirit and slay the enemy!

The Christian today has the full revelation of the Word of God to read, study, memorize and meditate on in order to fill his being with its truth and power. But so many of us have become spiritually anemic by ignoring the Word of God in our lives. Many have fallen into an existence of defeat and despair. The Word of God brings us back to God through repentance, then it reveals these truths to our heart and mind. This is the only way to victory.

Finally, Do it Jesus’ way! When Christ fought the temptations of Satan in the wilderness He showed us the way to fight our enemies. With the Word of God! By an act of His will he purposely used the Old Testament Scriptures as His weapon. “Thus it is written” He repeated time after time until Satan gave up and the angels came and ministered to Him. He could have spoken new revelation and the Biblical writers would have recorded it as Scripture but He did not. That is because He wants US to rely on the principles of the Scriptures today and see ourselves with Him on the Cross. We must see ourselves on the Cross in order to live a victorious life. You were at the Cross! You were ON the Cross! BELIEVE IT!